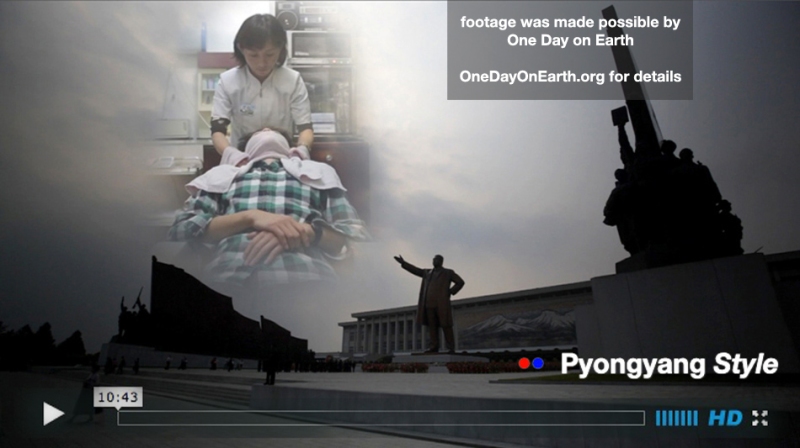 A few months ago, I had the privilege of visiting North Korea for a second time.  This time to shoot video – something I hadn’t done since Anhui.

Pretty much the only way anyone can visit North Korea is by joining a tour.  Because China is North Korea’s only ally, I knew my joining a Chinese tour would have fewer restrictions.  The North Koreans see less of a need to put on a show for the visitors; as is more the case with western tours.

Although both still photography and video are permitted, lenses that are above 200mm (more powerful zoom lenses) are not allowed.  As long as you take pictures or video of the places that they take you, it’s fair game.  North Korea wants the world to see their good side…

One evening when I returned to my hotel, I walked into a hair salon that seemed kinda hidden and not very well advertised.  The hairdresser that greeted me was boisterous and cheerful, and didn’t speak a word of any foreign languages.  I quickly realized that this might be one of the few opportunities any foreigner would get to interact with someone who wasn’t either a minder or tour guide, a shopkeeper or waitress (all of whom are well-versed in foreign languages).

There was something genuine and uncontrived about her that made me feel like she was just a normal hairdresser who somehow got placed to work in a hotel that hosted foreigners.  She was charming and quirky.  And for the first time, I felt like I was seeing something real, which wasn’t just being shown to me.

The first step was figuring out how much the haircut would cost.  After a few back and forth attempts to talk to each other (and trying to use every language that I barely knew a few words of), I made a gesture of a pen and paper.  She wrote down the number 20 first, and then wrote down the number 2.  I then realized that she meant “either 20 RMB, or 2 Euros.”  (As a tourist, you are not allowed to handle their currency – the reasons which I will blog about another time).

I thought it might be an interesting thing to record – getting a haircut, so I put my camera on the table in front of me, and turned it on…

Because I was part of the One Day On Earth project, covering North Korea, I knew I was going to shoot a lot, and I didn’t want to draw unnecessary attention to myself.  On my last trip, a “media checker” dressed in a military uniform had to go through every picture on everyone’s cameras when leaving the country.  I decided it would be easier to not reveal the fact that my camera is capable of taking video, so I covered the back screen with black electrical tape.

As I shot with Nikon lenses by way of a simple adapter, I lost any form of autofocus.  In addition, I thought it would be even more covert to manually focus without putting the camera to my face or looking through the viewfinder at all. For a few weeks before my trip, I’d practice every day, shooting with the camera around my neck, manually focussing and composing blindfolded.

It worked – although I took over 80 gigs of video, I didn’t stick out too much in the group.  And the funning thing is, this time the media checker didn’t even show up.

One Day On Earth is a global film project where on 10.10.10, at least one filmmaker in every single country in the world would film the highlights over a 24 hour period.  I covered North Korea.  The raw footage will eventually come out as a feature film, but here, I’ve made my own edit.  Stay tuned for the feature film though.  It’s a great project that we believe will help bring the world together.